We were very excited to visit Shunsaiten Tsuchiya, the only tempura restaurant in the Kansai area (Osaka, Kyoto, Kobe etc.) to be listed in the Michelin Guide as 2 Stars every year since 2012.

Located off the beaten path and in the quiet residential area of Suita, Osaka, Shunsaiten Tsuchiya sits in renovated traditional house of white stone walls and gray Kawara-tiled roofing. It is only about a 10 minute walk from Esaka Station in Osaka, it can also be reached by taxi, taking about 5 minutes. 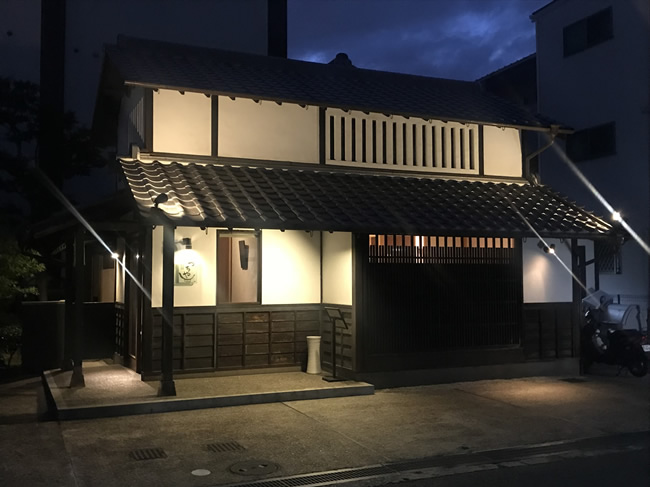 Today, we were looking forward to this meal, as not only does Shunsaiten Tsuchiya earn very high marks among critics, but is also well-known for having some of the best tempura in Osaka. They are known for using special techniques to bring out the umami in their food, and I was interested to see if they lived up to the hype. I talked with the chef and learned that Tempura is much more complex than I once thought it to be. It isn’t simply just deep-frying dishes or using fresh ingredients. Some of the techniques used are tailoring and adjusting the temperature that the food is cooked at, as well as the time that it is cooked, based on the characteristics of each ingredient. I was able to get a better sense of this not only after talking with the chef, Mr. Yukihiko Tsuchisaka, but also after enjoying his cuisine. 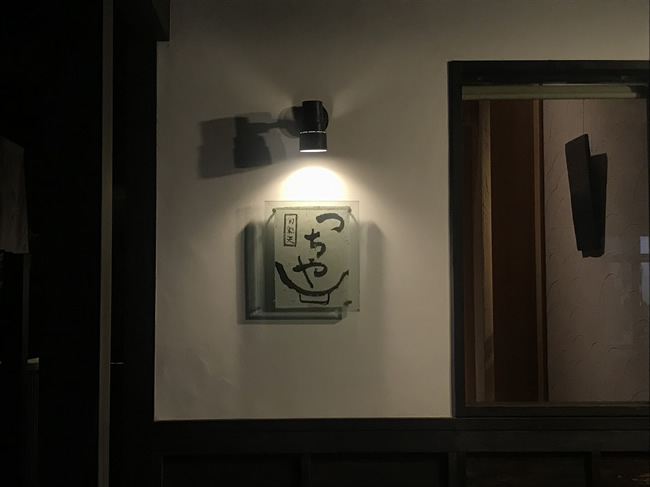 The gentle sweetness of the figs, fused with the eggplant gelatin, the texture of the yam and scallops added a nice touch. 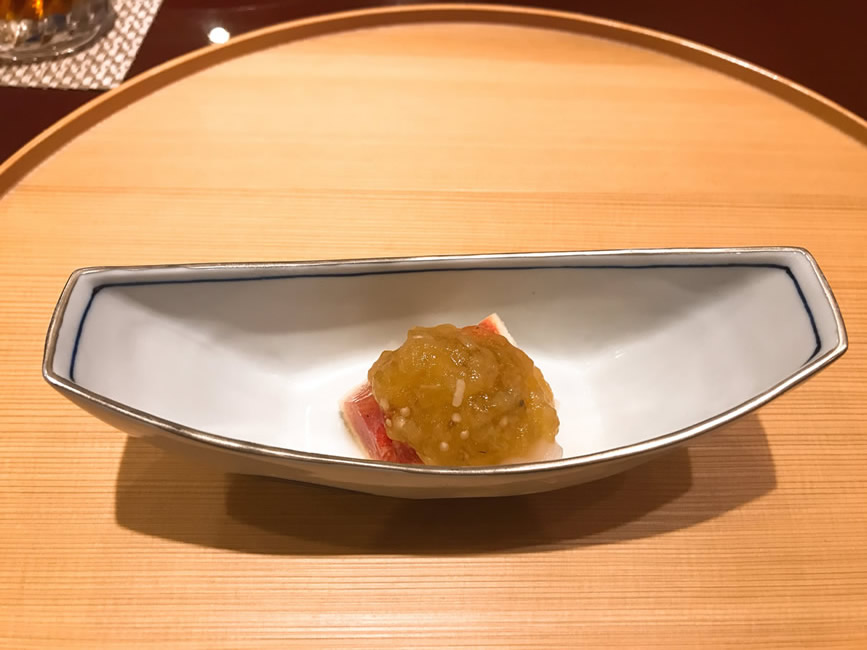 In this very cutely shaped plate of a rabbit, was Yellowfin Tuna, Sword-tip Squid and Botan Shrimp Sashimi.

What a cute plate! These sashimi was very sweet and looking at it we can get a really get a feel of the season from this dish? How so? Well the key is the rabbit and the ancient custom of “moon-viewing” in Japan.

Tsukimi, also called otsukimi, is a custom of viewing the moon during fall harvest. This tradition which has existed from ancient times has lived on and continues to be one of the most celebrated events in Japan. One part of this ancient tradition is the folklore about rabbits living on the moon, which plays a major role in the festival.

For those that have not heard of the story it goes something like this:

The Old Man of the Moon came down to Earth one day to test the kindness of three animal friends (a monkey, a rabbit, and a fox). Transformed as a beggar, the Old Man of the Moon wanted to know who was the kindest out of the three. He approached the friends, who were sitting around a fire, and asked if they had any food to spare.

The monkey gathered an abundance of fruit for the beggar. The fox brought the man a fish. But the rabbit did not have anything to give and offered to give himself as a sacrifice to the man by throwing himself into the fire and allowing the beggar to eat him. Before the rabbit could do so, though, the Old Man of the Moon transformed back into his original form. He said that the rabbit was a very kind soul and took the rabbit to live on the moon with him. This story, passed down through generations, contributes to the old-time Japanese belief that rabbits came from the moon.

‘Til this day, the Japanese continue to honor this ancient tale. 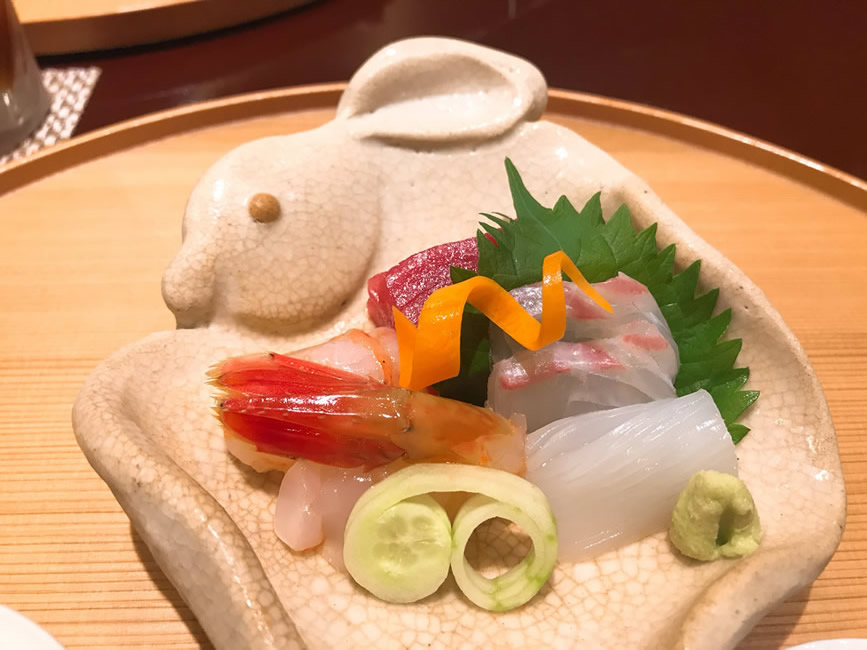 This dish comes served in a teapot. At this time of this meal, the end of summer,  the  “Hamo” or pike conger eel is a local specialty and signifies the end of summer and the beginning of fall. These seasonal ingredients, the Matsutake musrooms and pike conger are cooked in the teapot shown with the Japanese broth or “dashi”.  The fragrant scent as well as the combination of the pike conger, matsutake mushroom and Japanese broth was a very calming dish and one that I can still picture now. 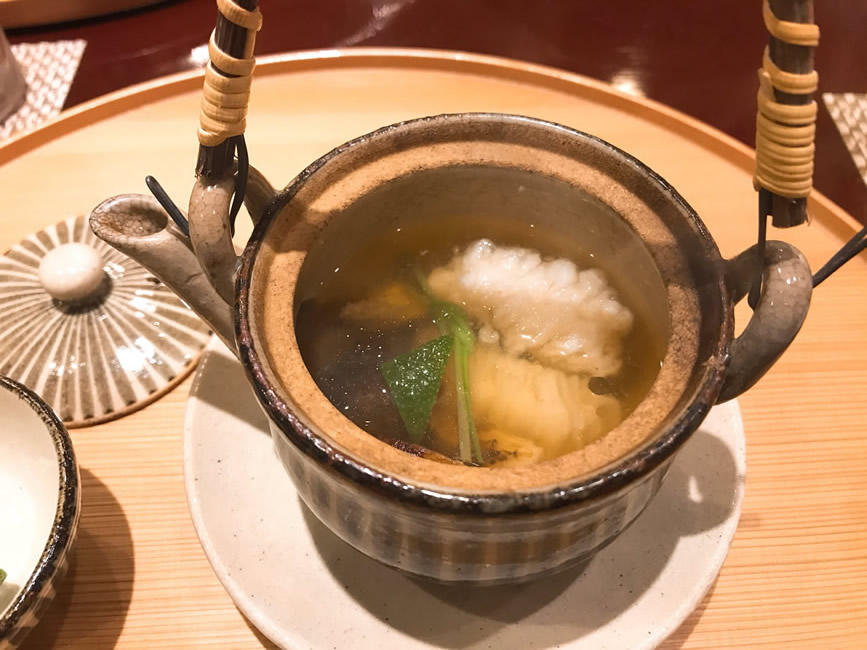 This is the “Hassun” a seasonally themed dish, in this case fall. This dish was very beautiful with the color of the dish and the different colors of the ingredients. This was a dish that I definitely wanted to take a picture of.
This Hassun dish is composed of 8 different foods including:
・ Nanjing Fu
・ Dried Mullet Roe Radish
・ Fried Ginkgo
・ Katsuo (Bonito or skipjack tuna) with a “shari” sauce
・ Smoked Tofu
・ Nanbanzuke (pickled vegetables with red pepper)
・ Mustard & Vinegar Miso (Avocado & Jellyfish)
・ Ohitashi (boiled seasoned vegetables) 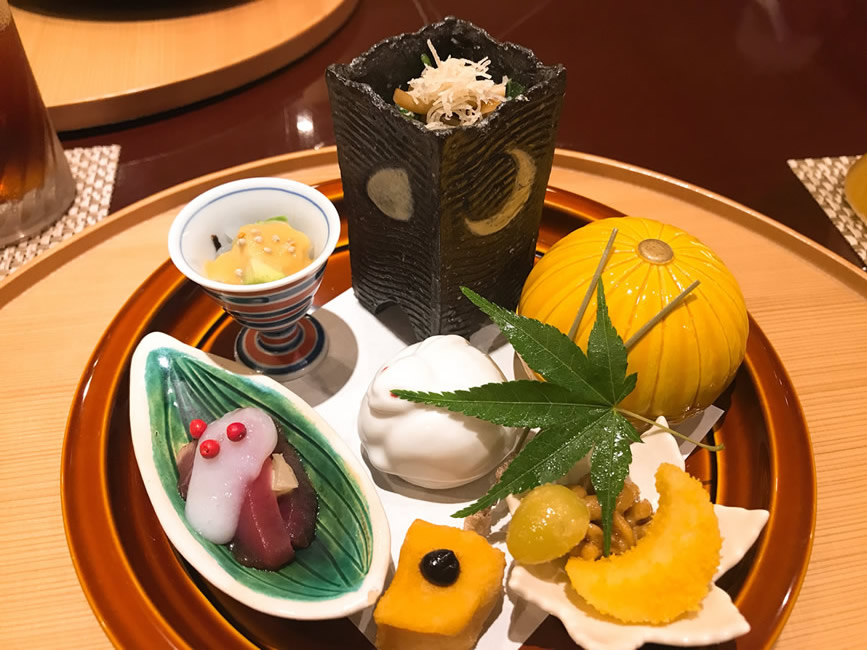 At last the tempura!  At Shunsaiten Tsuchiya, there are two types of courses prepared. A “tempura only” course and a tempura course with kaiseki or individual dishes that are also presented in the course along with tempura.

The first tempura presented here was a shrimp tempura. The shrimp was very sweet and the balance with the batter was perfect. 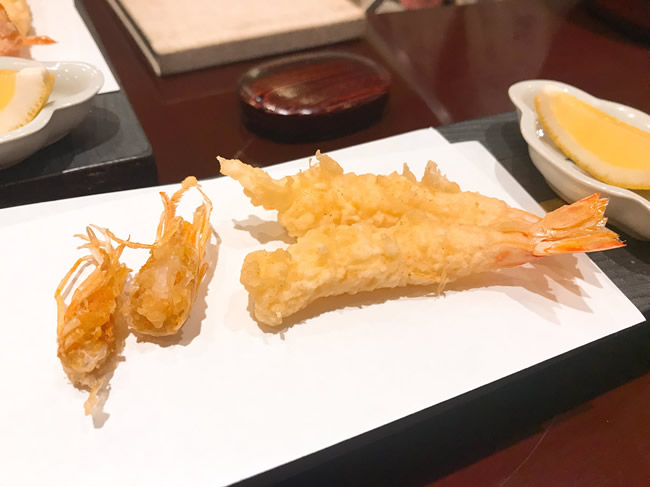 You could actually taste the natural sweetness in each kernel of corn. 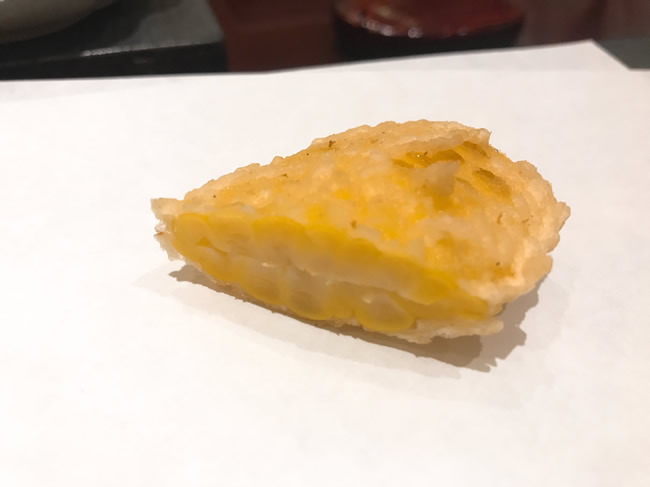 The texture of this was indescribably light and fluffy and and I was impressed by how the chef was able to deep-fry this and get the inside of it to its subtle pink state. 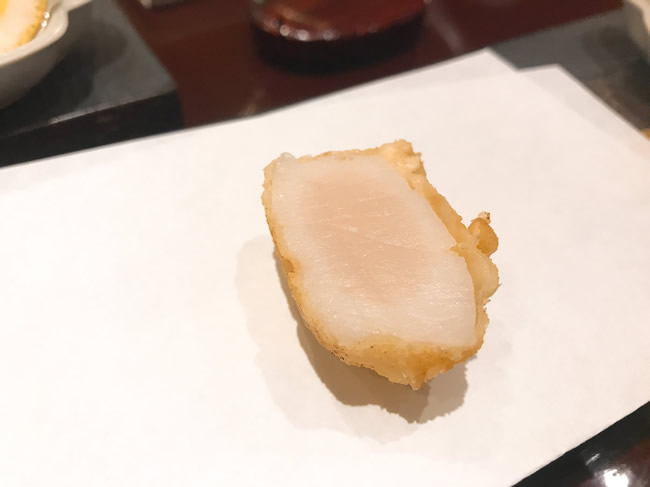 This looked really delicious! For those that are unaware, this particular type of crab is smaller than some of the other types of crabs in Hokkaido, but these crabs are huge. This the first time I have ever seen “Kegani” crab this big!

Kegani Crab
The hairy crab (kegani in Japanese) or horsehair crab is found in the Pacific Ocean and the Sea of Japan. It gets its name from the spiky hairs that cover its entire body. This little critter is smaller than the snow crab and the red king crab, making many people say it is more difficult to eat, but it has a dense , sweet flavor, making the effort of cracking open that shell well worth it. People that really love crab will often say that this is among their favorite type of crab. It is often boiled in saltwater to bring out its rich original flavor, then cut into sections and eaten by hand. It is one of the most popular types of crab found in Hokkaido. 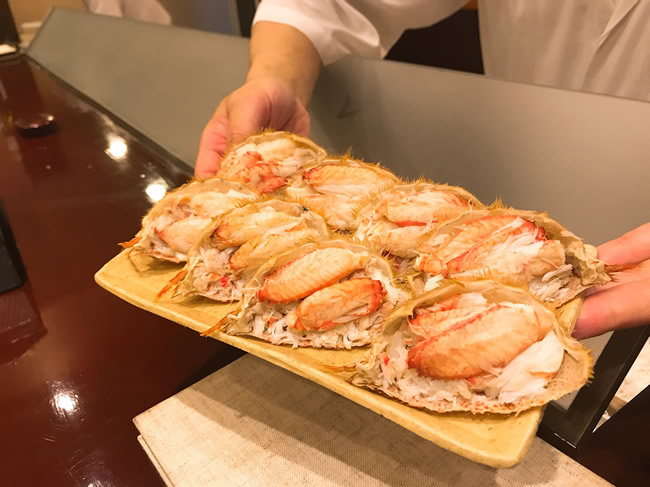 This was the first time I have had this. The crab was deep-fried and seasoned with miso. I never knew that crab could taste so good as tempura. 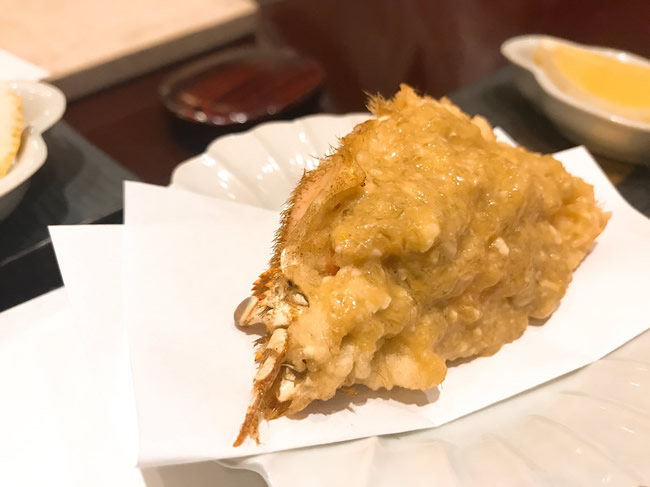 This chestnut was quite sweet, but not too sweet. I think that the only way to get it this sweet is in tempura. It made me really feel that tempura there is much more than meets the eye with tempura. 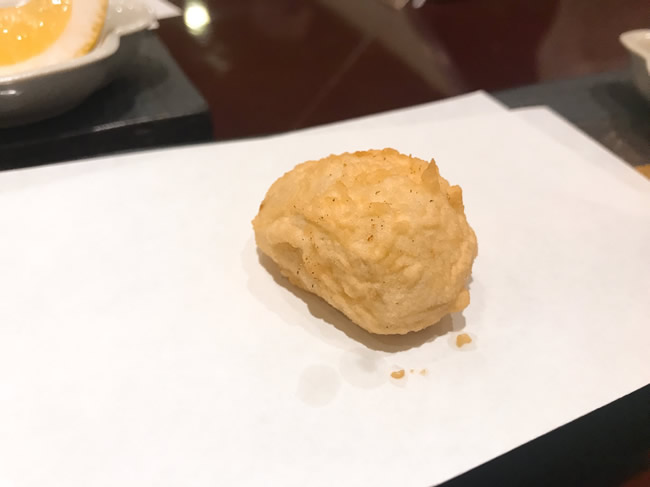 After ayu sweetfish is cooked it loses its unique biterness after sometime, which some people love. Therefore for those that love this bitterness, the more fresh the ayu sweetfish the better. 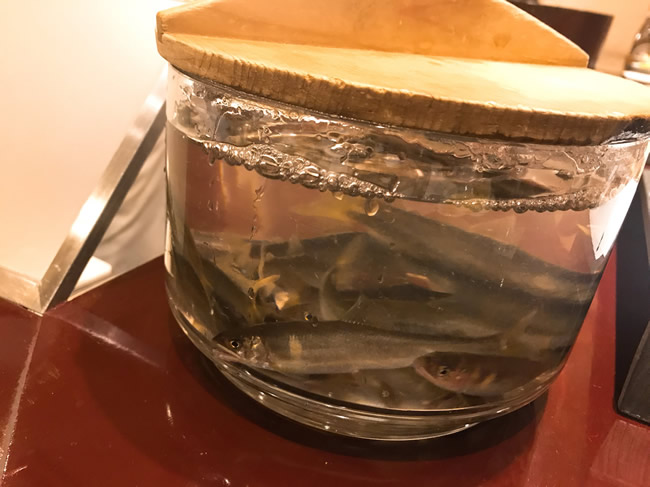 What a beautiful looking dish, so beautiful I was hesitate to eat it.  I was impressed that they were able to get the fish to look  like this- the fish seems as if it is almost floating on the plate. I imagine it wouldn’t be so easy to keep the fish in its original shape after deep-frying it. 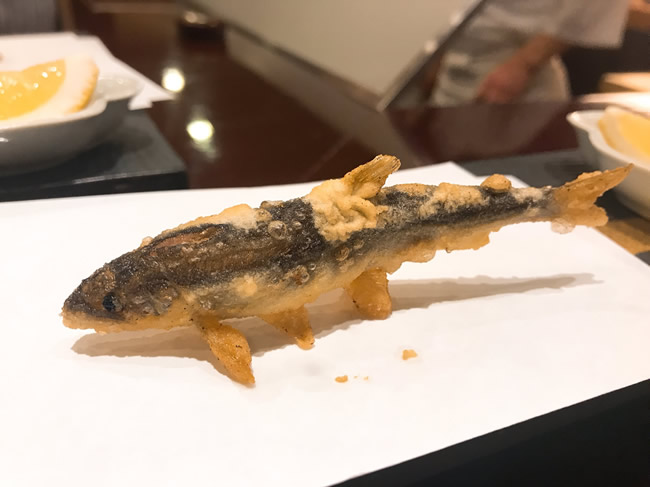 This took be by surprise. The rich abalone offal sauce really brought out the sweetness and deliciousness of the abalone. 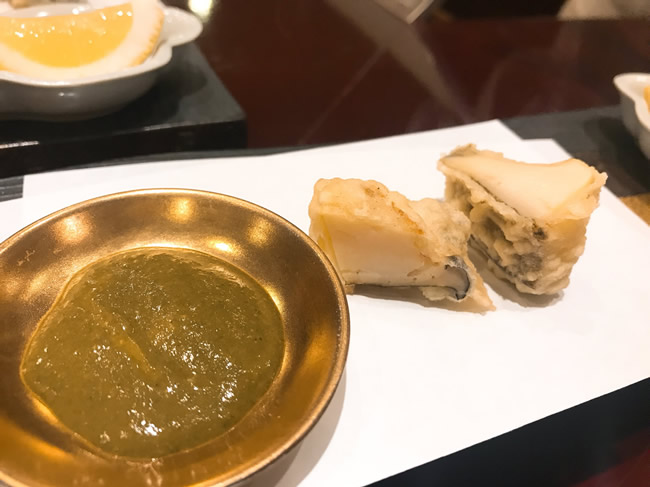 This wasn’t just big. They were able to cooked this just right and cut it perfectly. The seeds inside the okra gave it a great balance. For those that dislike okra, I invite you to come to this restaurant to try this. I think it would make you change your mind about it. 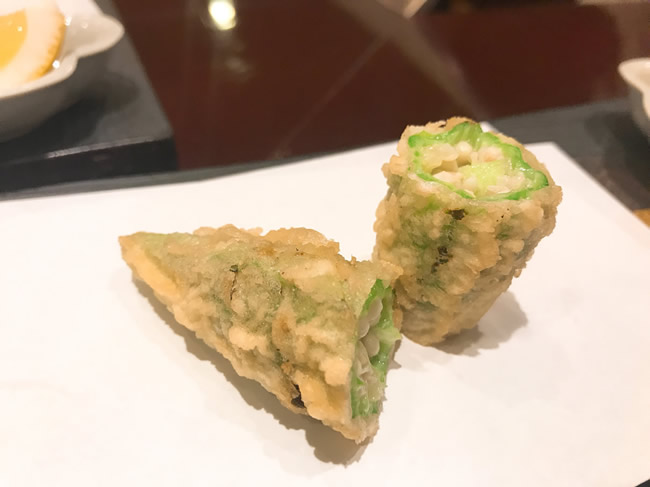 Another delicacy,  shark fin. I wondered what it shark fin would look like once deep-fried into tempura. 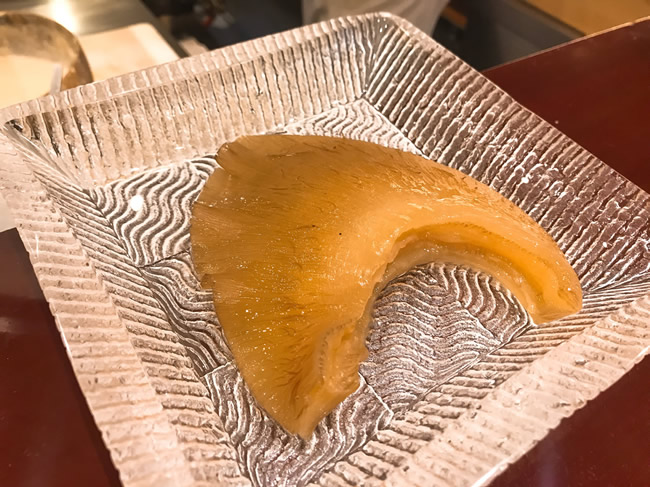 This had a crispy texture to it and just the right temperature of tempura. The batter that wrapped the shark fin brought out the taste of it, what a treat to be able to eat this delicacy. 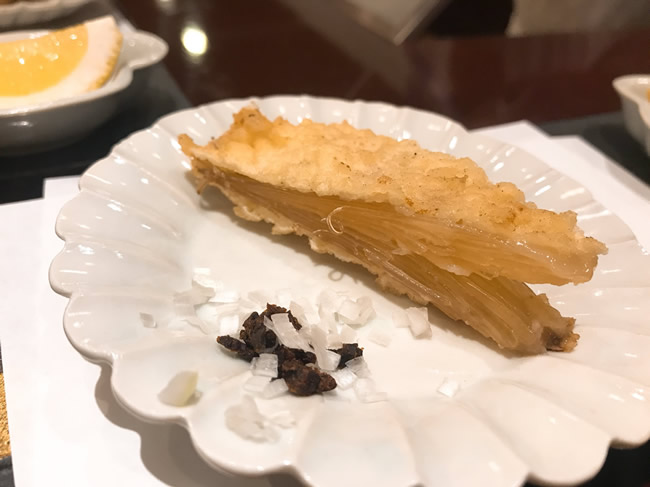 I was amazed that they could get even wagyu to taste amazing as tempura.

Lots of umami from the meat. 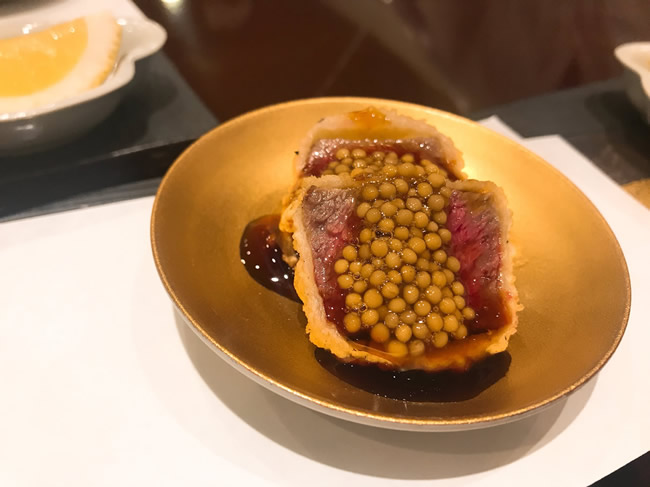 Sweet potato. This dish morphed from a vegetable into a dessert.

The sweet potato was sweeter than the chestnut, but not too sweet. They were able to get the balance of sweetness just right. 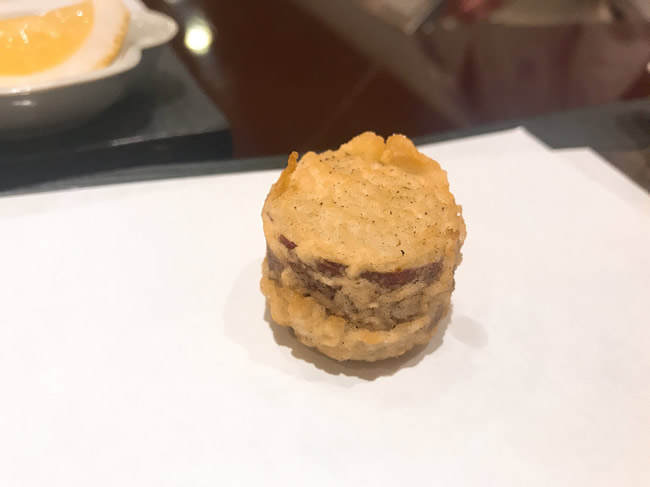 This palate cleansing dish was composed of red Konnyaku (konjac). 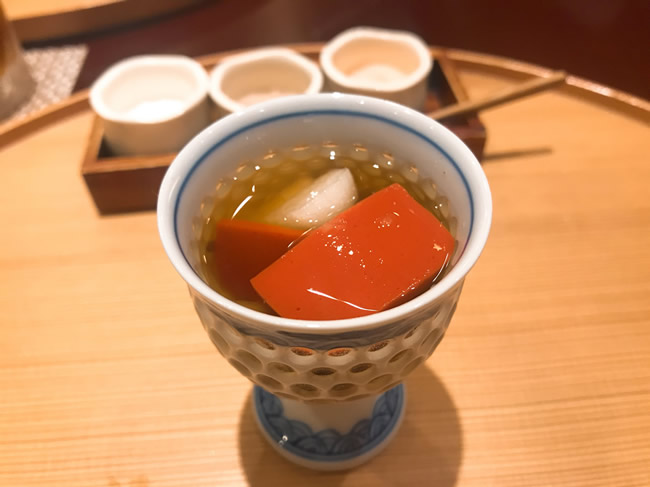 It is quite a rare sight to see such large scallop adductors gathered in one place. This dish was nearing of end for the main dishes. 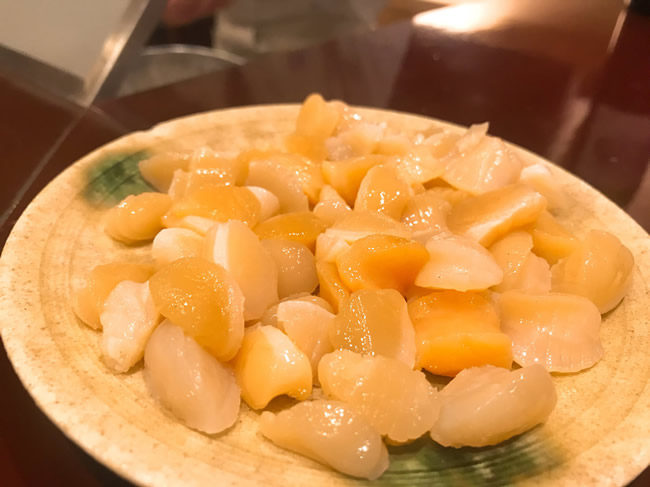 To close as one of the last main dishes, was “Tendon” (tempura over rice) “Tencha (tempura over tea and rice)”. I was really split over which one to choose as they both sounded quite appetizing. 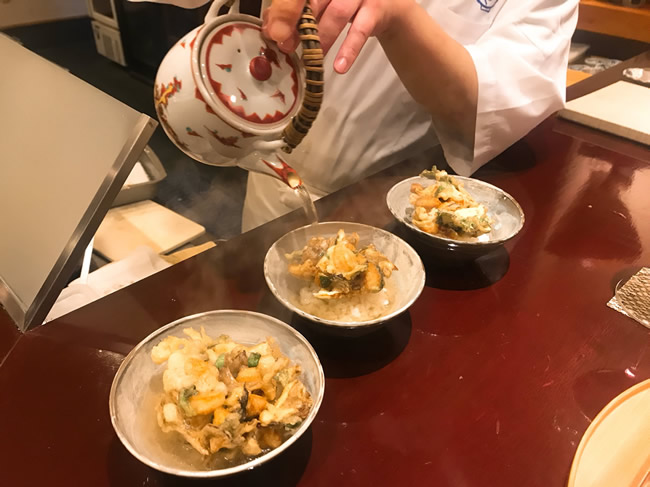 The tempura wasn’t oily at all and the tempura balanced quite well with the Japanese stock. 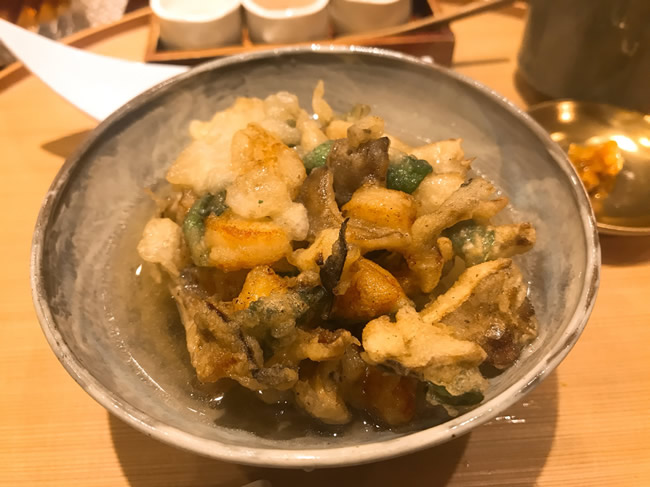 Dessert to end the meal. 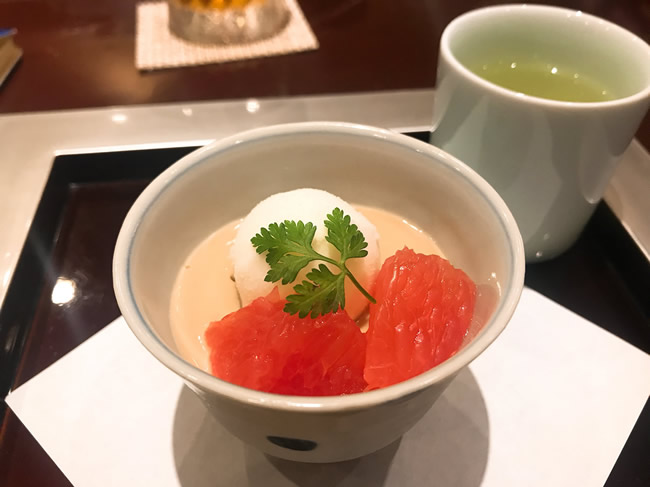 Although it may not be conveyed or understood by just looking at the pictures above, tempura is quite entertaining, and there is a lot of fine attention to detail that I saw such as adjusting the heat for each ingredient, and the different techniques utilized to serve their delicious creations. Overall I had a great time and experience  and feel I was able to get feel and get a glimpse into the complex nature of tempura.

In addition, I got the chance to talk with the chef, Mr. Yukihiko Tsuchisaka, who trained hard, earning his stripes and experience at a famous Japanese restaurant, and eventually opened up Tempura Shunsaiten Tsuchiya. We enjoyed the harmony between the Japanese kaiseki and tempura course he created for us.

I hope I have the chance to visit Shunsaiten Tsuchiya again for each season of the year.